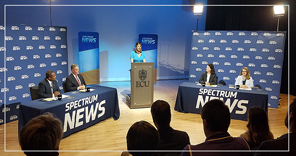 By Greg Griggs on October 26, 2019 in advocacy, Chapter Affairs

Spectrum News’ Loretta Boniti is serving as the moderator of a multi-part series on state health care issues. The segments are airing on Spectrum News and are being sponsored by the North Carolina Institute of Political Leadership (IOPL), a non-partisan organization that educates future political and community leaders.

Spectrum filmed the series’ final segment in Henderson, NC, on October 17th, 2019, with NCAFP’s Executive Vice President Greg Griggs, MPA, serving as a guest panelist in discussing healthcare delivery, including issues such as telemedicine, Certificate of Need and healthcare consolidation. This segment is expected to air this weekend.

The NCAFP is the state's largest specialty medical association, with a membership of over 4,000 family physicians, residents and medical students.

What an awesome conversation with leaders across the state thanks to @upstream_org! Love to have time with my @myncafp peeps to plan how to make NC the healthiest state in the country! https://twitter.com/myncafp/status/1222168376438665216

Why leave out Barbeque giants Kansas and Missouri? ⁦@msquared279⁩ oh I know this is just for states not sending a team to the #SuperBowlLIV ⁦@aafp⁩

MISSION
To advance the specialty of Family Medicine, in order to improve the health of patients, families & communities in our state.

Visit the Career Center
Recruiters, place your open NC jobs in front of our highly-qualified members!